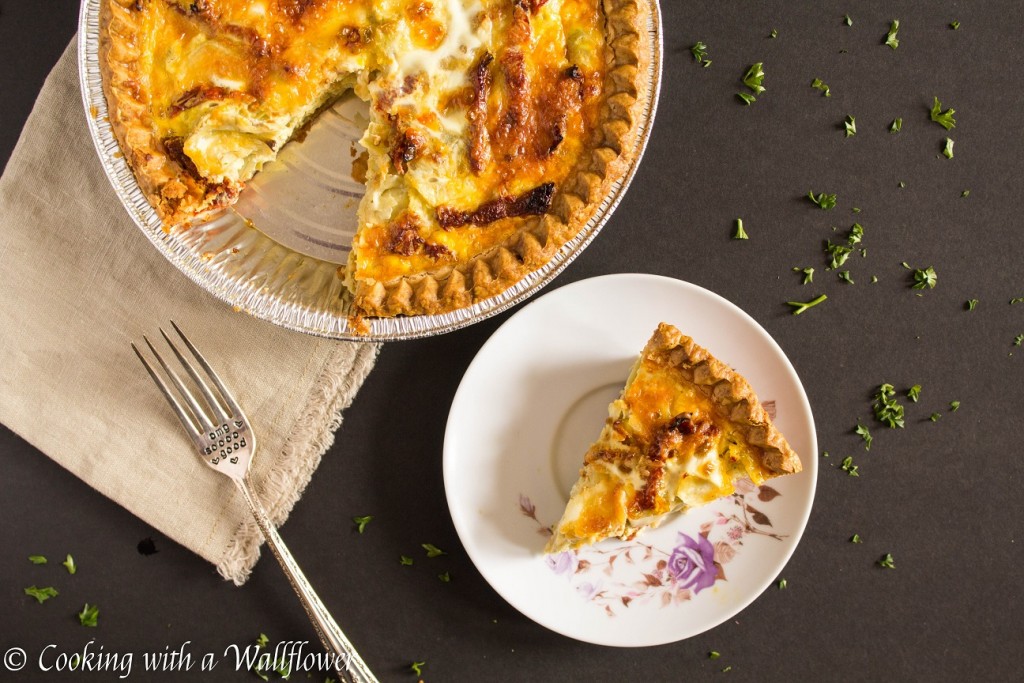 One bite. That’s all it takes for you to fall in love with this quiche.

Quiche is one of those simple dishes that cost a ridiculous amount for a small slice when you order in a restaurant. I feel like the portion is never enough. But even though quiche seems and sounds fancy, it’s super easy to make and you can always customize the ingredients to your taste. I love that you can use fresh seasonal ingredients. 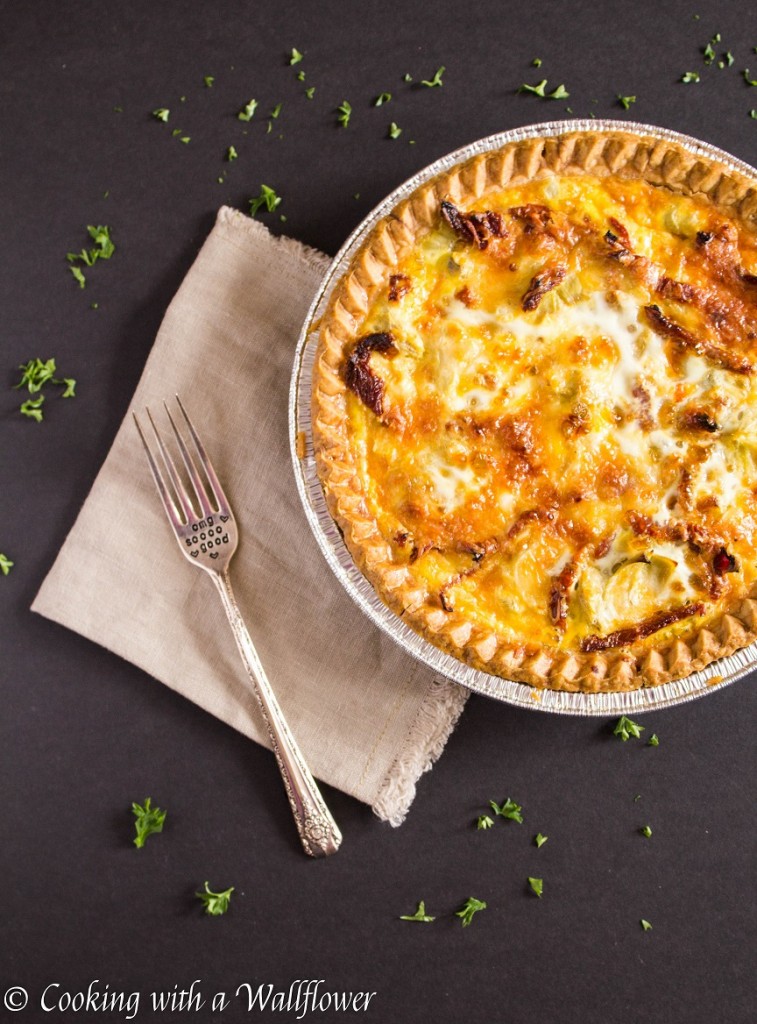 For this particular recipe, I finally got around to trying to remake a slice of quiche I had at Filoli almost a year ago. It’s not exactly the same, but I loved the combination of artichoke and sun-dried tomatoes, so I had to fill my quiche with them.

I love the fluffiness and creaminess, and each bite of the artichoke and the sun-dried tomato gives a little tartness to the quiche. 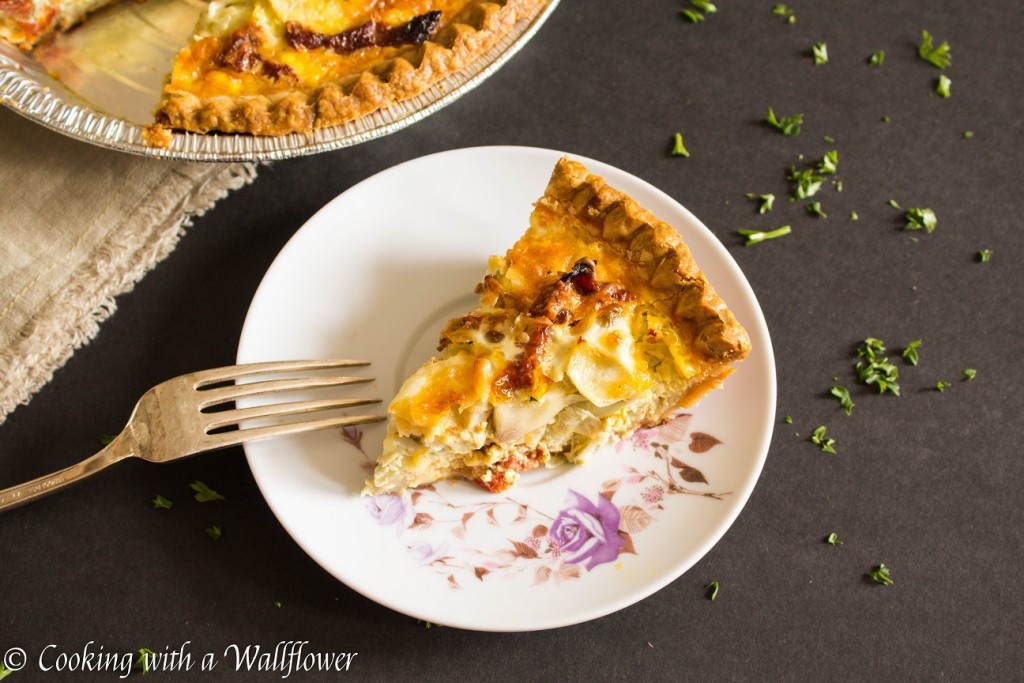 I didn’t make my own pie crust this time. I wanted this quiche recipe to be as simple as possible so I used store-bought 9-inch deep dish pie crust, which at Smart & Final cost me $2.50 for two. It comes with a disposable tin, which makes for easy clean up later.

While the pie crust is pre-baking, add about a tablespoon of olive oil to a small pan. Allow the oil to heat for about a minute before adding minced garlic. Cook the garlic for a couple minutes until it becomes lightly brown and aromatic. Add the sliced onions, and cook them until they’ve softened. Drain all liquids and set them aside for now.

I used canned artichoke for this recipe. Make sure to drain the water and squeeze out as much water as possible. You don’t want your crust or quiche to become soggy. Chop up the artichoke into small pieces, and then spread them at the bottom of the pie crust. 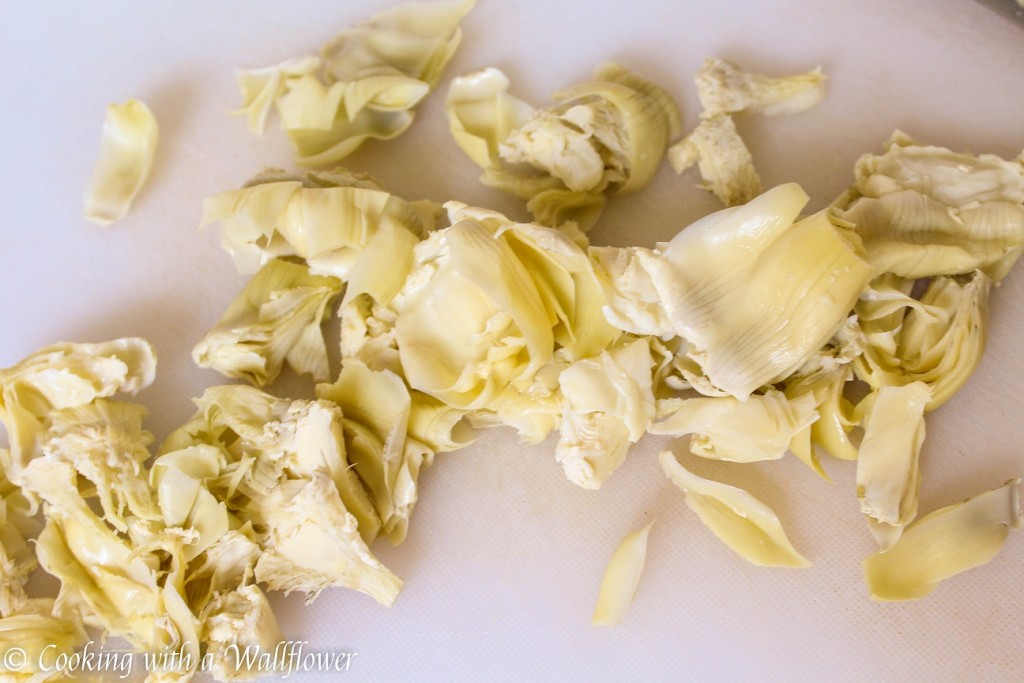 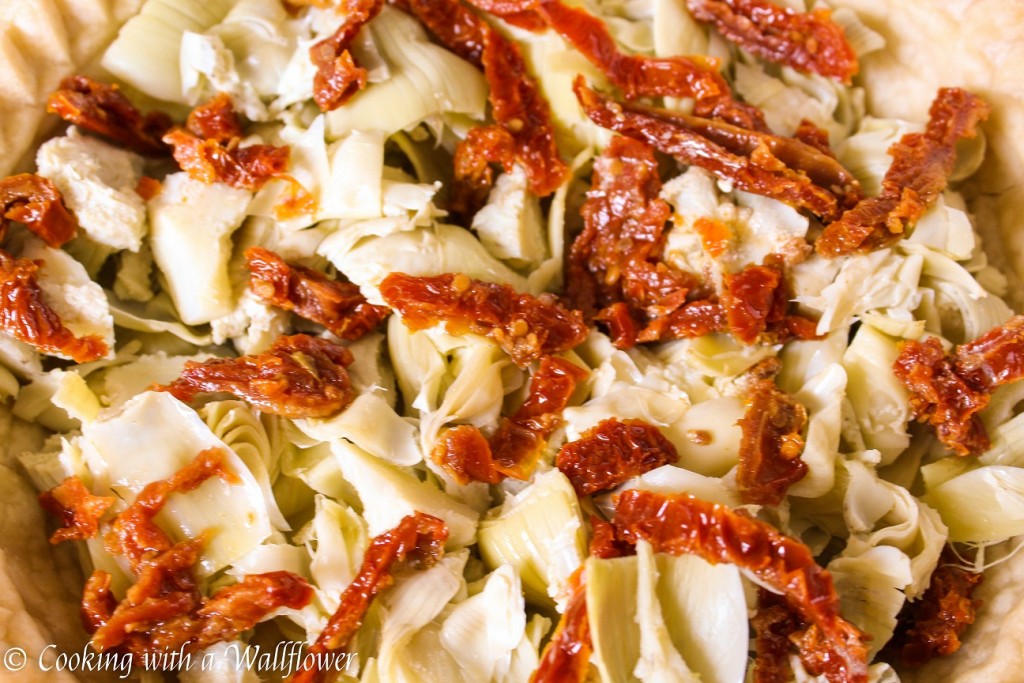 Now, pour on the garlic and onion. Then sprinkle cheese over the top. I used a mixture of cheese such as cheddar and mozzarella. A more yellow cheese would give a more yellow colored top. 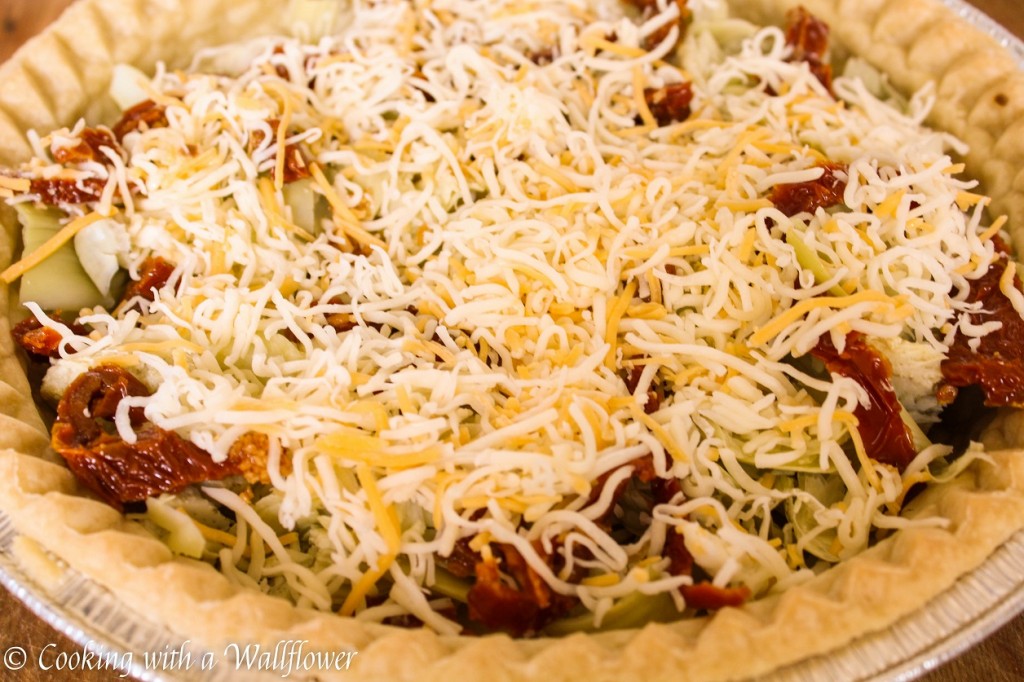 In a medium sized bowl, whisk together four beaten eggs with half and half, 2% milk, and salt. I used half and half in this egg mixture to create a creamy texture. If you would like to make this a healthier quiche, you can use all 2% milk.

Pour the egg mixture over the rest of the ingredients. It will fill the pie crust almost to the top. 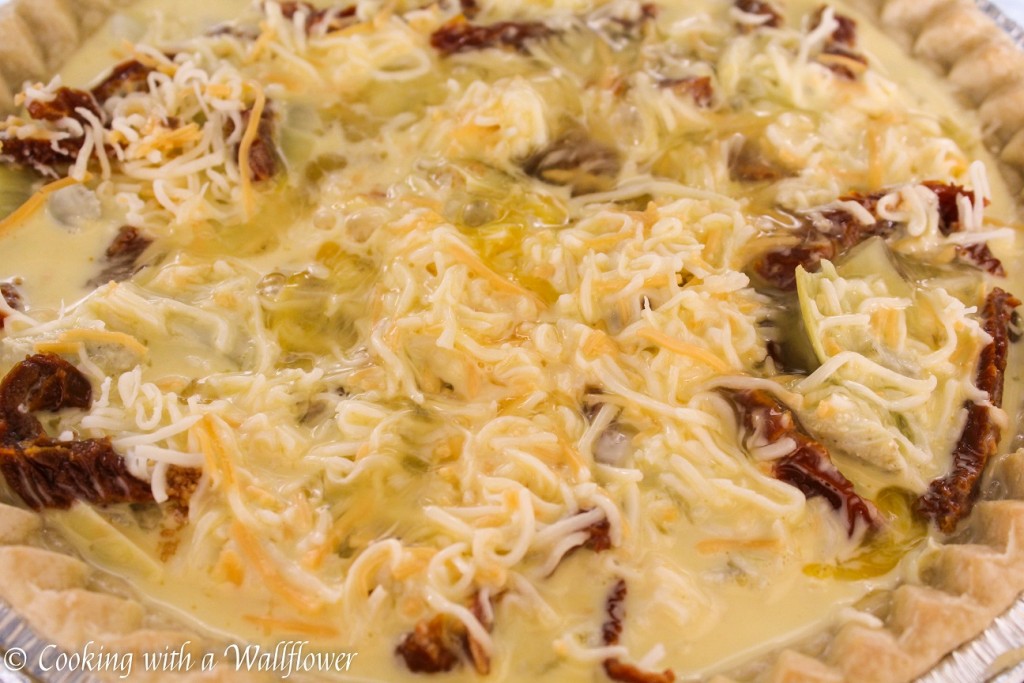 Place the quiche into the oven and bake it for 45 minute to an hour. The time varies depending on the oven. Mine was done at around 45 minutes. You can check the quiche to see if the middle appears firm and no longer jiggles.

Remove the quiche from the oven and allow it to cool for a few minutes.

Slice the quiche into 6 pieces, and serve them warm.

Looking for a healthier or gluten free version? You can also try this Crustless Spinach and Artichoke Quiche. 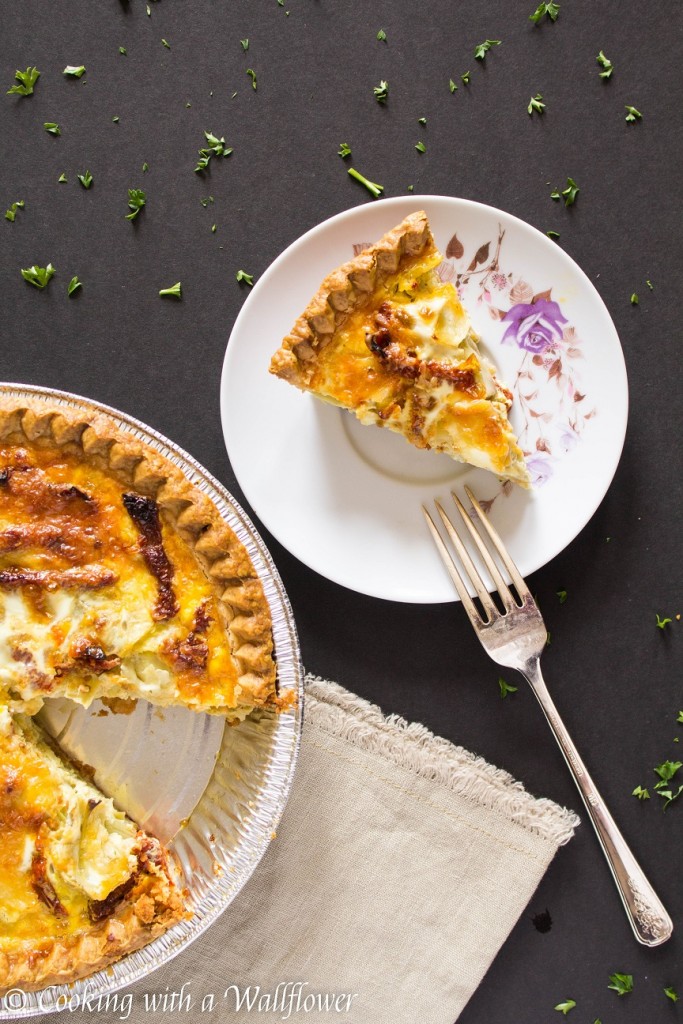 Join in me and other food bloggers at Fiesta Friday! 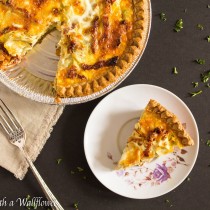 For a gluten free version of this quiche, leave out the pie crust.
Wordpress Recipe Plugin by EasyRecipe
3.2.2802