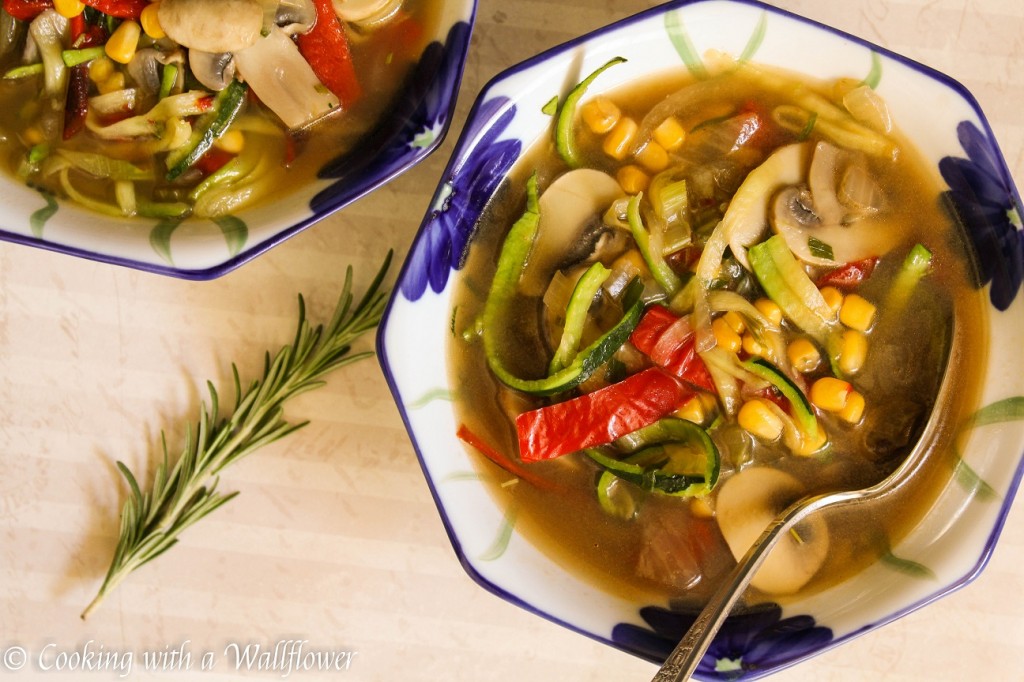 It’s spring! Which means it’s time to whip out the fresh ingredients.

While I was grocery shopping yesterday, I was sooo excited to see heirloom tomatoes! And as I continued to shop, I added rosemary, tarragon, mushrooms, bell peppers, butter lettuce, and so much more to my basket.  And yes, I almost always shop with a basket instead of a shopping cart when I’m by myself because I don’t want to buy more than I can carry. It limits how much food I buy (and money I spend on food). Flawed logic? Maybe. But it works for me. 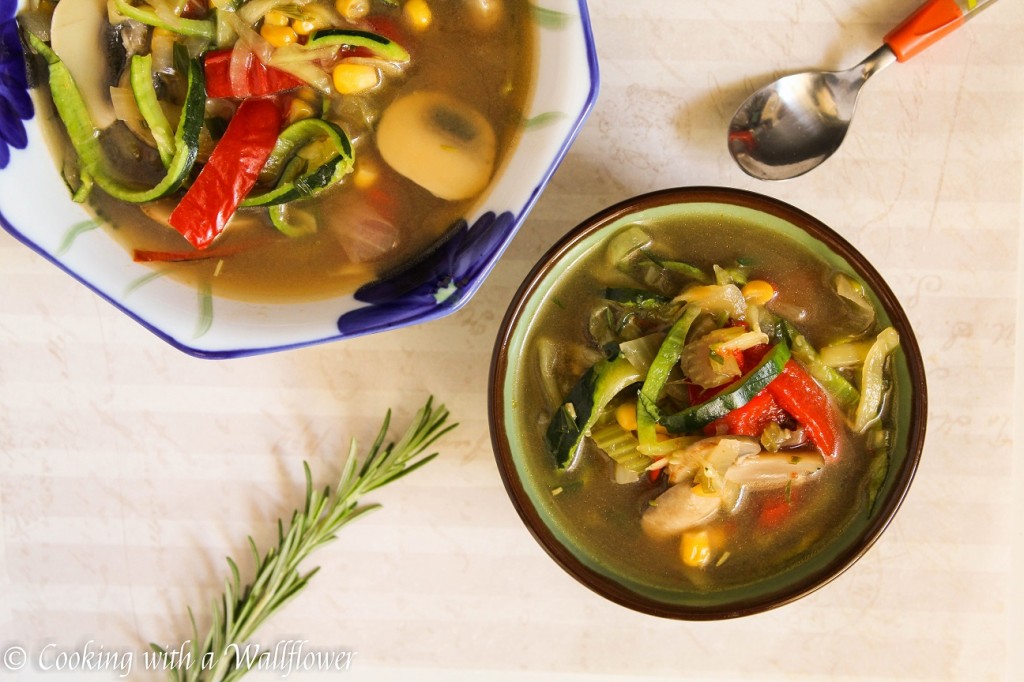 Filled with roasted red peppers, zucchini noodles, mushrooms, onions, celery, corn, rosemary, and tarragon, this soup is amazingly delicious, healthy, and embodies the flavor of spring. Each bite (or maybe slurp is a better word?) has the taste of roasted red peppers and a hint of rosemary and tarragon. You can always add more herbs if you want the soup to be more aromatic.

I loved that this soup also gave me an opportunity to use my spiralizer for the first time to make zucchini noodles, which I was excited about. Unfortunately, I’m not very good at. But practice makes perfect, right? 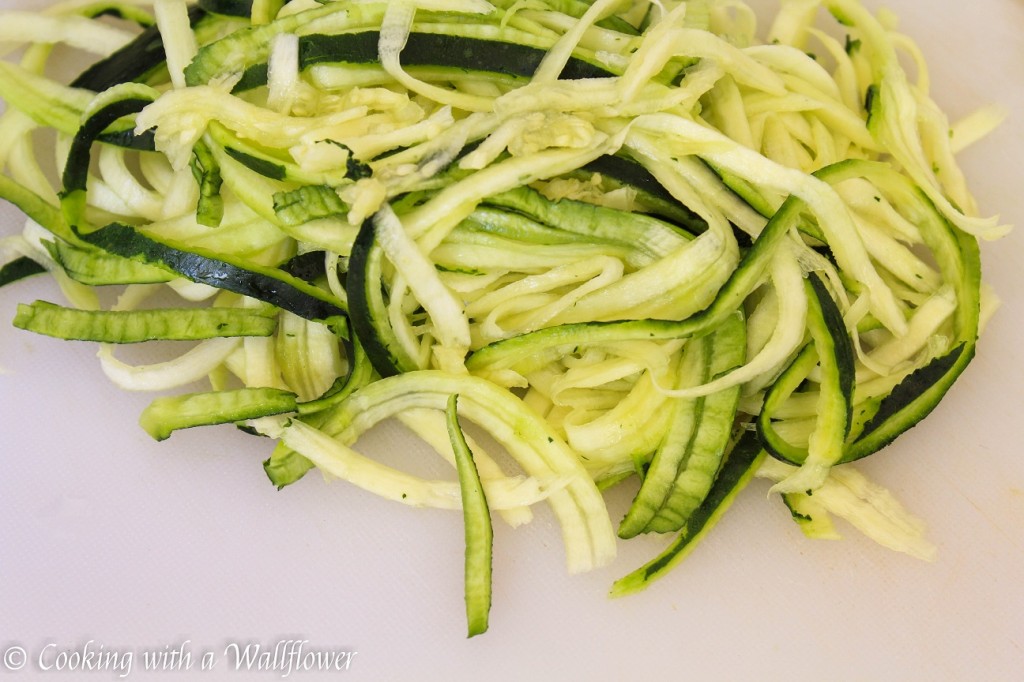 Preheat the oven to 400F. Line a 9×9 inch baking pan with foil and drizzle the bottom with olive oil. Cut the bell pepper into fourths and place them on the baking pan. Roast the bell peppers for about 15 minutes, then turn them over, and roast for another 15 minutes. Once the red bell peppers are soft and slightly blackened, remove them from the oven and allow them to cool before cutting them into small pieces. 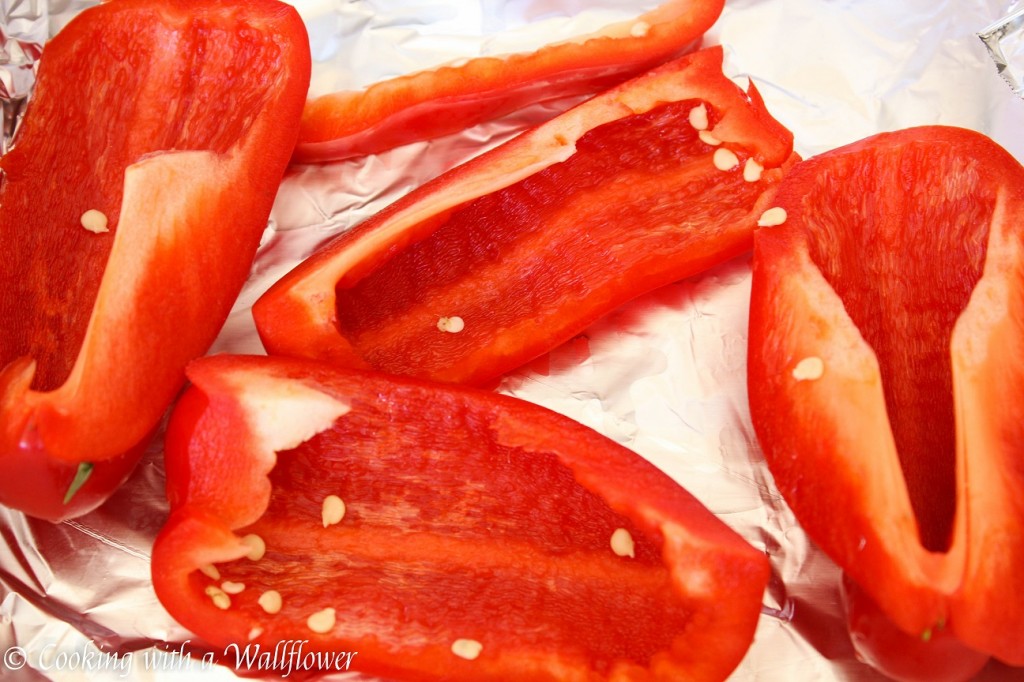 While the red bell peppers are roasting in the oven, prepare the rest of the ingredients. Slice the onions, cut the celery, slice the mushrooms, spiralize the zucchini, and chop both the tarragon, the rosemary, and the salt. You can add more of the herbs or the salt according to your tastes.

In a medium sized pot, add about a tablespoon of olive oil over low to medium heat. Allow the olive oil to warm for about a minute before adding the onions, celery, and mushrooms. Cook them until they’ve softened. 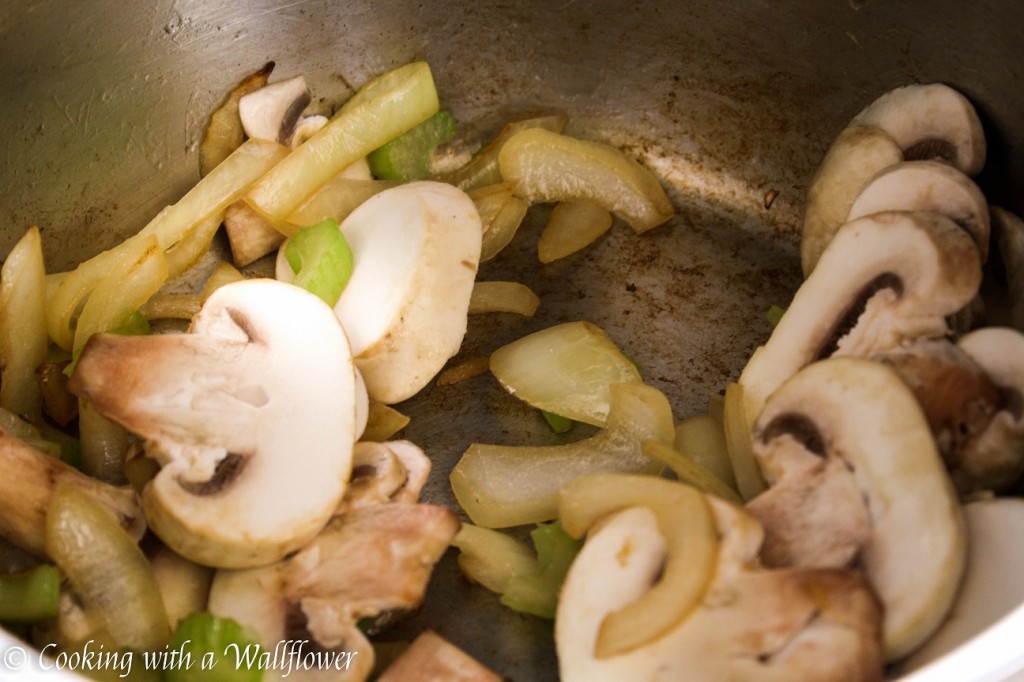 Pour the broth into the pot carefully to avoid splashing. Add the finely chopped tarragon and rosemary. Allow the broth to come to a simmer. 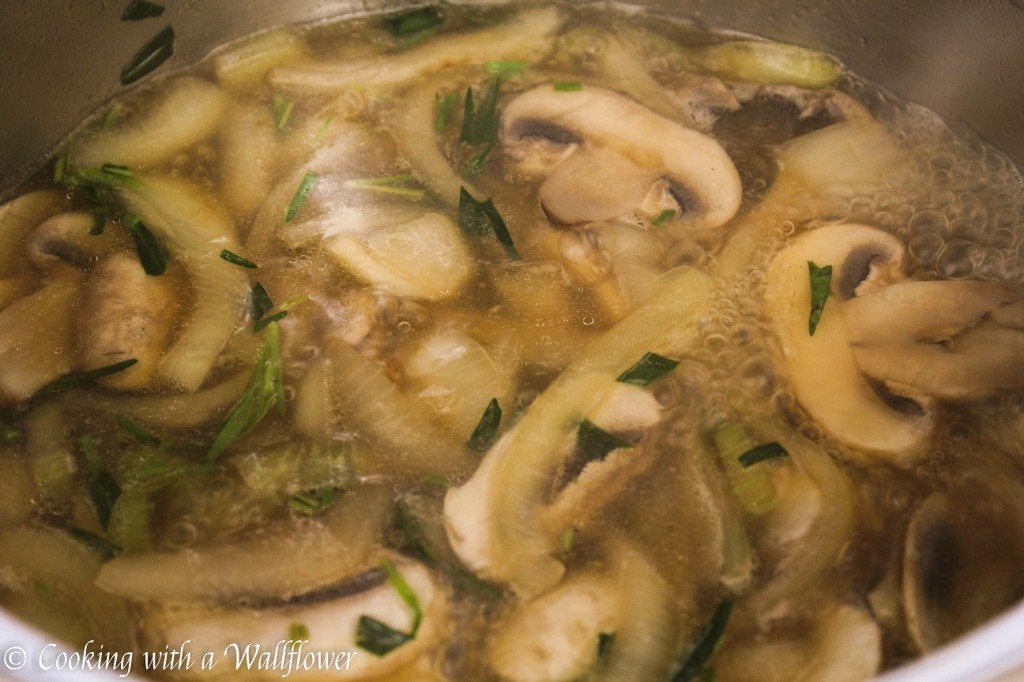 Add the roast red bell peppers and the zucchini noodles. 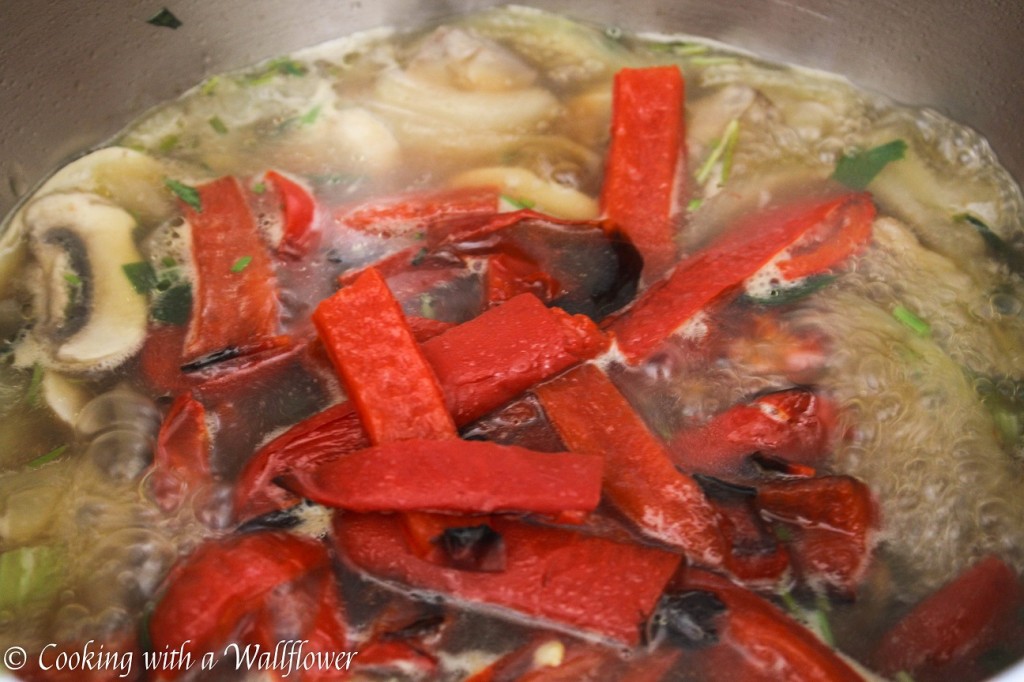 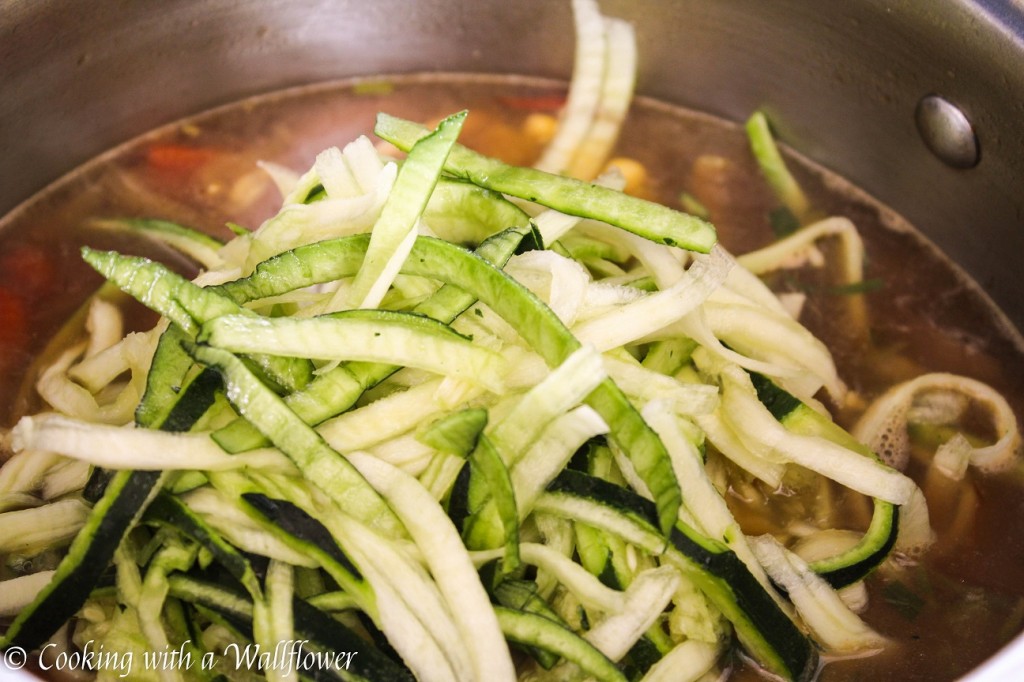 Remove the pot from heat, and serve the soup warm. 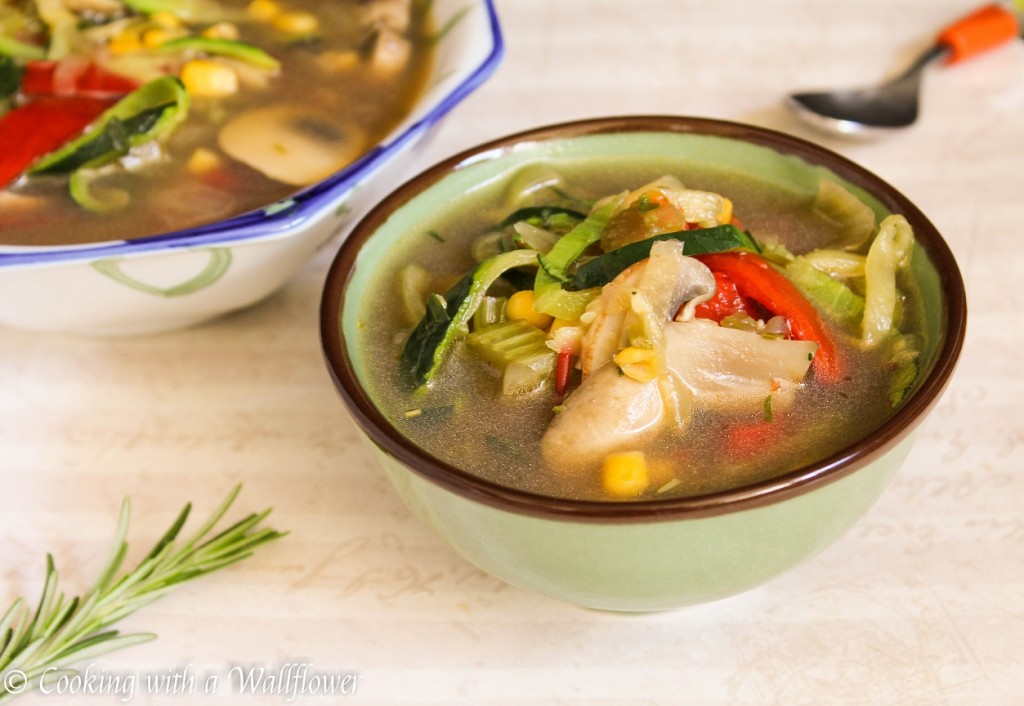 Come join me and some of my blogger friends at Fiesta Friday where you’ll find tons of great recipes! This week’s link up is hosted by Selma @Selma’s Table and Margy @La Petite Casserole.