Slightly spicy with the tangy taste of lime, these easy to make shrimp are succulent and flavorful. They make a light delicious meal when served over a bed of pasta with refreshing pesto. 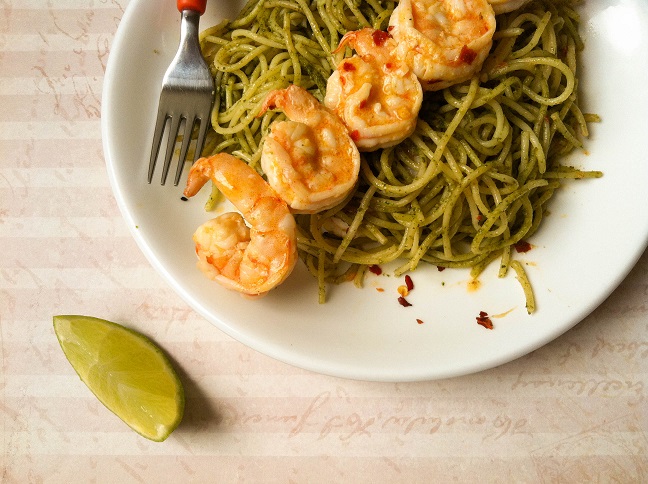 You won’t believe how easy it is to make this dish! Actually, you probably do. I just wanted to emphasize it. 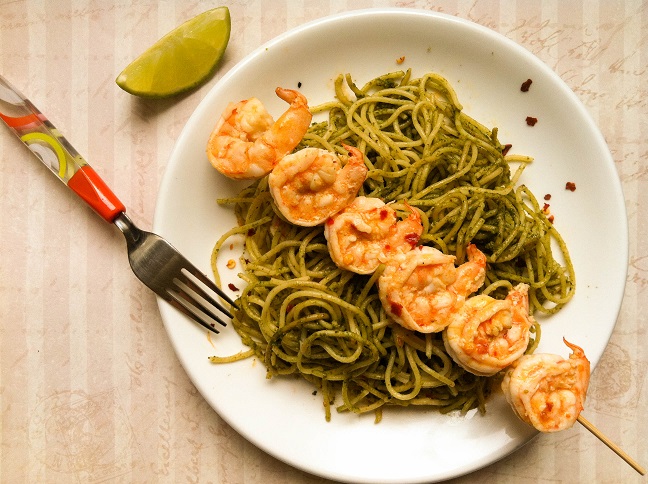 Earlier this week, a few close friends and I decided to meet up for dinner so that we could catch up. It’s been awhile since we last saw each other, and there was just so much to talk about.

Um… Honestly, there’s probably more talking on my end. I get extremely chatty when I’m comfortable.

Unfortunately, since our schedules are soo different, we had no choice but to have a late dinner. Life tends to get in the way. It was easier when we were all still in school with a simpler schedule, but once we started working and going separate ways, it’s a whole lot more difficult to find time.

Anyway, I was cooking that night by default. The perks of being a food blogger. But I’m not a fan of eating late at night. It’s just my preference. I really dislike going to bed feeling full. But if I have to eat a late dinner, I want something light.

This spicy lime shrimp pesto pasta is the perfect dish for that.

Large juicy shrimp cooked in a buttery, spicy, and citrusy sauce served over a bed of pasta tossed in fresh pesto. How amazing does that sound? 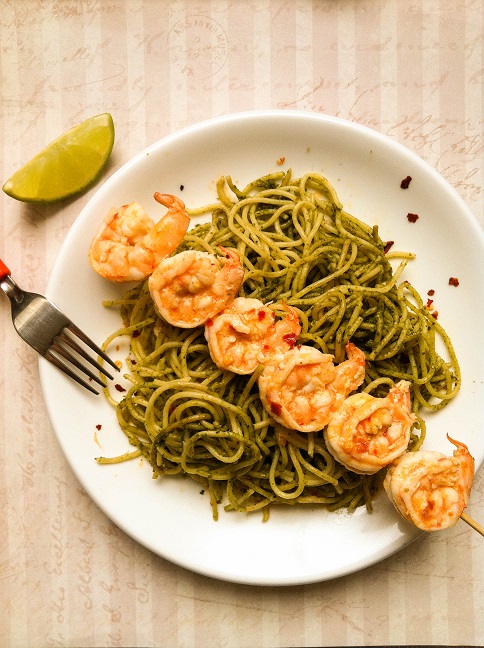 Today’s post is sponsored by I Can’t Believe It’s Not Butter. They provided me with the spread to create this recipe.

I Can’t Believe It’s Not Butter just reformulated their recipe using simple ingredients such as plant-based oils, purified water, and a pinch of salt. This new look and formula has just been released in stores in October. What I really like about them is that it tastes buttery, but it’s made from plant based oils. It’s great for cooking, especially since it has 40% less calories and 70% less saturated fat than real butter and has no cholesterol. 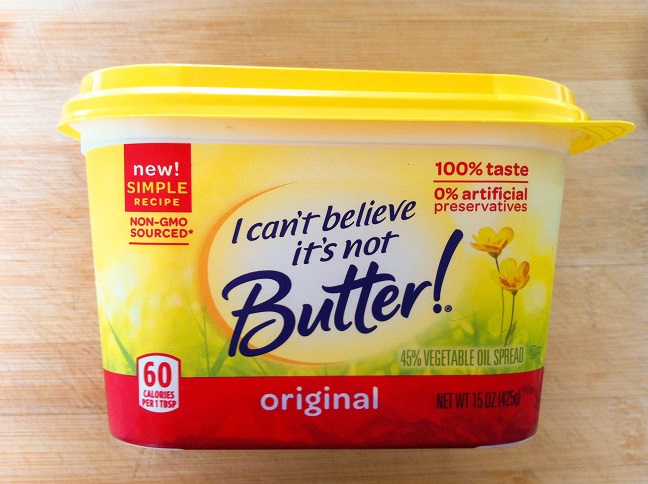 First, boil water in a medium sized pot. Once the water is boiling, add about a half pound of pasta. Cook the pasta according to the directions on the box until it becomes al dente, about 8-9 minutes for me. Drain the noodles and run them through cold water to prevent them from sticking to each other and from continuing to cook. I know people often complain that the pasta becomes cold, but I’d rather have to reheat them than have to eat clumped up noodles. I like doing it this way, but you can cook them however you like =)

Toss the pasta in pesto, and divide them into three portions. Plate the pasta, and set them aside for now. You can use store bought pesto or homemade pesto. Your choice. I personally keep homemade pesto frozen, and I just thaw them whenever I need some.

Add two tablespoons of I Can’t Believe It’s Not Butter into a skillet over medium heat. Next, add crushed red chili peppers, paprika, and lime juice. Allow the ingredients to simmer for about 30 seconds to let the flavors blend together.

Add the shrimp and cook them until they turn a reddish orange color and are no longer gray. As soon as they’ve changed colors, you’ll want to remove them from heat. There’s nothing that makes me more sad than overcooked shrimp. 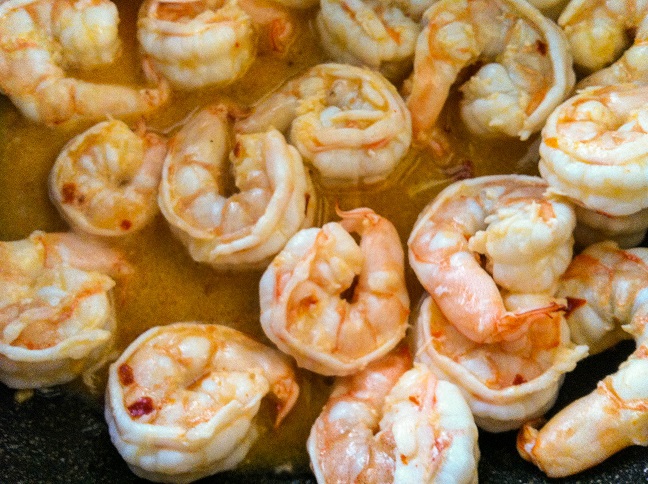 Top the pesto pasta with the shrimp, and drizzle the spicy lime sauce over the shrimp. 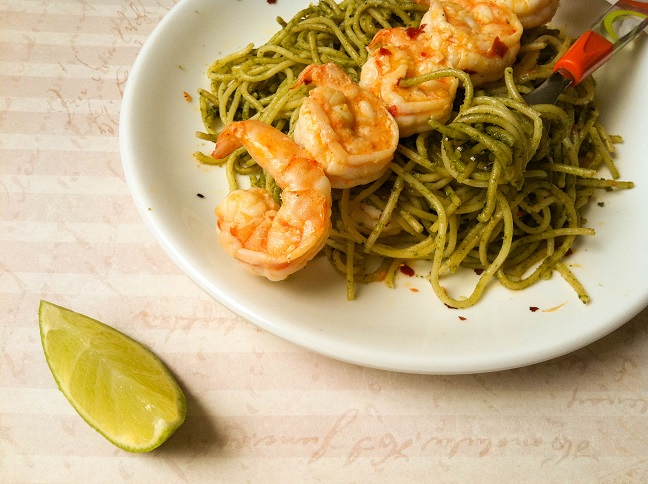 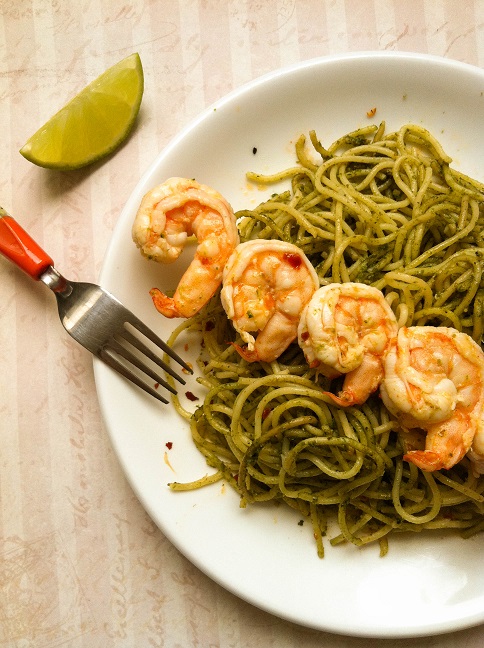 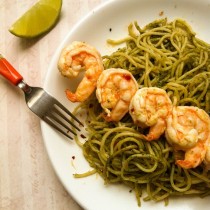